Featuring the voices of Kristen Bell and Idina Menzel, “Frozen” is the coolest comedy-adventure ever to hit the big screen. When a prophecy traps a kingdom in eternal winter, Anna, a fearless optimist, teams up with extreme mountain man Kristoff and his sidekick reindeer Sven on an epic journey to find Anna’s sister Elsa, the Snow Queen, and put an end to her icy spell. Encountering mystical trolls, a funny snowman named Olaf, Everest-like extremes and magic at every turn, Anna and Kristoff battle the elements in a race to save the kingdom from destruction.

Thoughts
This movie is probably the best Disney film I’ve ever seen, and since I’m an animated movie lover, I’ve seen a lot. The animation is amazing, the songs are wonderful (and stick in your head), and the story is heartwarming.

I watched this movie with my grandkids Harley and Alecia. They both loved it. In fact, it’s the first time I’ve ever known Harley to sit still through a whole movie. That kid is full of enough energy for 10 kids, so he’s always moving and talking. But he was quiet, and his eyes were glued to the screen during the whole movie. I was amazed!!

This is a movie that I think everyone would enjoy. Moms, dads, kids, grandparents…everyone!

The animation was beautiful. The movie was funny, it has a few sad parts, and it showed how much love and loyalty family members can have toward each other. It also had some bad guys and a cute, hilarious snowman. And a snow monster. A BIG snow monster.

The only negative I saw in this movie was the way Elsa’s  “special powers” affected most of her and Anna’s lives.  I don’t want to say anymore about this in case you haven’t seen the movie, but if you do watch it, you’ll know what I’m talking about.

If you haven’t seen this movie yet, buy a copy or rent it. I rented it but now want to buy a copy so we can watch it again and again. It’s that good!!

Here is a link to the book @ Amazon 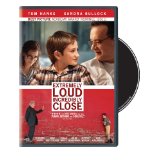 Oskar is convinced that his father (Hanks), who died in the 9/11 attacks on the World Trade Center, has left a final message for him hidden somewhere in the city. Feeling disconnected from his grieving mother (Bullock) and driven by a relentlessly active mind that refuses to believe in things that can’t be observed, Oskar begins searching New York City for the lock that fits a mysterious key he found in his father’s closet. His journey through the five boroughs takes him beyond his own loss to a greater understanding of the observable world around him.

I’ve wanted to watch this movie since the first time I saw it advertised. I love Sandra Bullock and Tom Hanks, so I thought it had to be good. Sadly, they were barely in the movie, but I did love the segments that they were in.

The character of Oskar was hard to like. He was rude, mean to his mom and had a potty mouth. But I did like that he would do anything possible to find out what the key was for, because he thought it was a message to him from his father. Plus, the actor who played Oskar, Thomas Horn, did a great job of portraying him.

I loved that the mom went to such extremes to make her son’s journey as smooth as possible. I loved the relationship between Oskar and his dad! And I loved how Oskar and his grandfather related to each other.

One of the main things I didn’t get was why this young boy was allowed to traipse all over New York at all hours of the day and night by himself. I just can’t see that happening. Plus, during all his wanderings, the streets were mostly people-less. It’s NY, and NY isn’t not people-less, no matter the hour.

Then there’s the fact that the man who is supposedly Oskar’s grandmother’s friend from her home country is really her (ex?) husband. Even when Oskar figures out who he really is, nobody comments on it. Not the grandmother, not Oskar, not the grandfather, not Oskar’s mother. I can’t imagine this happening in real life and nobody talking about it!

Final Thoughts:
Even though there are a few things that just didn’t make any sense (to me at least), there are some amazing scenes, and that made the movie well worth watching!

I guess the good outweighs the bad, because I’ll more than likely watch this movie again. 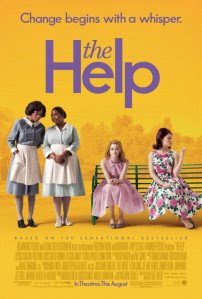 The Help
Since my daughter got married we don’t get to see each other on a daily basis, so we have a girls night out every so often. Recently we decided to go to a restaurant in a town nearby and then to see “The Help”! I was trying to wait until I’d read the book before I saw the movie, but with review obligations I knew I wouldn’t get to the book soon enough to suit me. So I did something I rarely do. I caved and saw the movie first. It wasn’t my fault though, it was all of those blog post I saw raving about the movie. You made it sound so awesome that I HAD to go see it.
I. Could. Not. Wait.
99.99% of the time, when a book or movie is built up in my mind due to glowing reviews such as “it was amazing”…it isn’t. But “The Help” was better than I was expecting. The characters were so real and vivid that I loved them all, even though I wanted to slap some of them. The movie had me laughing over and over, crying a few times, and even made feel ashamed as a person that there were some people who could treat other human beings so badly. That said, it was still such a feel good funny movie. There were many laugh out loud moments, but there was one scene in particular that had me laughing so hard I just about slid off my seat into the floor! Those of you who have seen the movie know which one I’m talking about.
There was never a dull moment and I thought this movie was FANTASTIC! It is now one of my favorite movies and I plan on buying it on DVD so that I can watch it over and over. I’d definitely give it a AAA+.
If you haven’t seen this, GO NOW!!! You won’t be disappointed! Want a sneak peak or refresher course? Here you go:
Newer Entries
Pray Without Ceasing
1 Thessalonians 5:17