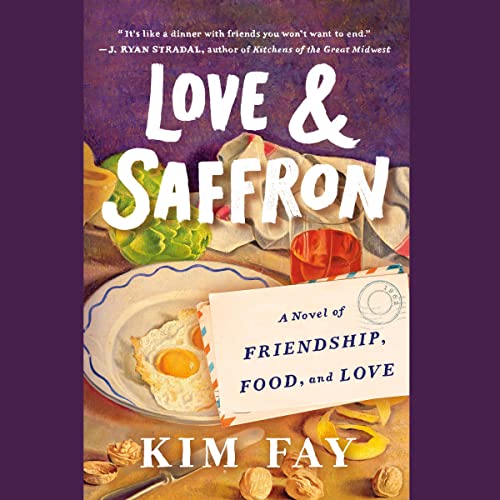 Love & Saffron: A Novel of Friendship, Food, and Love by Kim Fay

When twenty-seven-year-old Joan Bergstrom sends a fan letter—as well as a gift of saffron—to fifty-nine-year-old Imogen Fortier, a life-changing friendship begins. Joan lives in Los Angeles and is just starting out as a writer for the newspaper food pages. Imogen lives on Camano Island outside Seattle, writing a monthly column for a Pacific Northwest magazine, and while she can hunt elk and dig for clams, she’s never tasted fresh garlic—exotic fare in the Northwest of the sixties. As the two women commune through their letters, they build a closeness that sustains them through the Cuban Missile Crisis, the assassination of President Kennedy, and the unexpected in their own lives.

Food and a good life—they can’t be separated. It is a discovery the women share, not only with each other, but with the men in their lives. Because of her correspondence with Joan, Imogen’s decades-long marriage blossoms into something new and exciting, and in turn, Joan learns that true love does not always come in the form we expect it to. Into this beautiful, intimate world comes the ultimate test of Joan and Imogen’s friendship—a test that summons their unconditional trust in each other.

A brief respite from our chaotic world, Love & Saffron is a gem of a novel, a reminder that food and friendship are the antidote to most any heartache, and that human connection will always be worth creating.

Thoughts
I enjoyed this book, it reminded me of my best friend who I met when I moved into a new apartment. Louise was my next door neighbor. The first time we met we it was like we’d known each other for ever. I was 21 and she was 42, not as big a difference as Joan and Imogen, but still a gap. I had one son under 1 and her only child still living at home was almost 16. This book brought back a lot of good memories for me.

This is a feel good book for sure, full of things to keep you entertained. It’s a bit sad at times too and I liked the balance. It’s a short audio at just 3 hours and 46 minutes but there is a lot of story packed into that time. I liked hearing the references to the 60’s.  More memories!

The only negative thing I can say is that there was one repetitive thing that did get old, and that’s the PPS’s at the end of the letters. I’m not a fan of hearing anything that keeps repeating. Other than that, I loved this book.

11 Responses to “Love & Saffron: A Novel of Friendship, Food, and Love by Kim Fay”