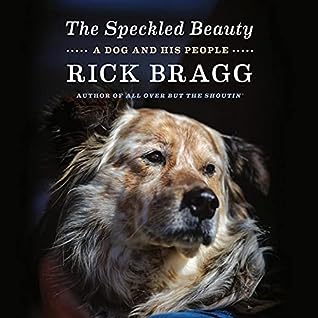 The Speckled Beauty: A Dog and His People by Rick Bragg

Speck is not a good boy. He is a terrible boy, a defiant, self-destructive, often malodorous boy, a grave robber and screen door moocher who spends his days playing chicken with the Fed Ex man, picking fights with thousand-pound livestock, and rolling in donkey manure, and his nights howling at the moon. He has been that way since the moment he appeared on the ridgeline behind Rick Bragg’s house, a starved and half-dead creature, 76 pounds of wet hair and poor decisions.

Speck arrived in Rick’s life at a moment of looming uncertainty. A cancer diagnosis, chemo, kidney failure, and recurring pneumonia had left Rick lethargic and melancholy. Speck helped, and he is helping, still, when he is not peeing on the rose of Sharon.

Thoughts
First of all, I am a lifetime animal lover, especially dogs. Second of all, just look at how beautiful Speck is!

I’ve never read a book by this author before but when I saw the cover I fell in love with Speck and knew I would get a copy, which I did immediately.

This book was a 5* right from the beginning. I don’t think I could handle a dog like Speck, but I sure love him. It’s like he’s part dog, part rowdy boy. He sure keeps Bragg (and everyone else)  on his toes!

I don’t want to give away any of the story, but Speck gets into things. Lots of things. He has a mind of his own and does whatever pops into his head. And all he wants from Bragg or any of his other people is rubs, scratches, and food. All the foods!

This book is not only a great story about Speck that will give you all the feels, it’s about his people too.

Not only is Bragg the author, he also narrates it. I love his sense of humor, he is very funny! Now I want to read all his books, funny or not, I love the way he tells a story.

I laughed out loud many many times while listening to this book, and it was very much need!

20 Responses to “The Speckled Beauty: A Dog and His People by Rick Bragg”