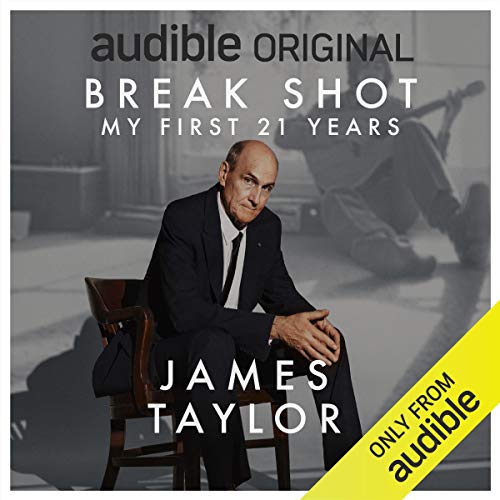 “I’m James Taylor and I’m a professional autobiographer,” says the celebrated folk singer at the start of this tender audio memoir. Through decades of music by one of the best-selling musicians of all time, who created classics like “Fire and Rain” and “Carolina in My Mind,” James Taylor has doled out his history in the poetry of his work. Taylor says his early life is, “the source of many of my songs,” and Break Shot is a tour of his first 21 years in rich, new detail. Praised by Forbes magazine as going “beyond the spoken word,” Break Shot combines storytelling, music and performance to create a one-of-a-kind listening experience. Longtime fans will savor a crop of musical gems, including an unreleased recording of the beloved hymn “Jerusalem,” selections from his newest release American Standard, as well as new original scoring by Taylor specially recorded for Break Shot and more from the Grammy Award-winning artist.

Recorded in his home studio, The Barn in western Massachusetts, Taylor tells the deeply personal story of his youth, which is entwined with the story of his family. What started as an idyllic tight unit soon became a family sent to different emotional corners—like a break shot in the game of pool, he says, when you slam the cue ball into the fifteen other balls and they all go flying off. By the time Taylor released his breakout second album in 1970, Sweet Baby James, he had seen the disintegration of his parents’ marriage and his family crumble in the aftermath. He had committed himself twice to a psychiatric hospital, battled depression, a heroin addiction, suffered a relapse, and traveled far away from the wood smoke and moonshine of the North Carolina landscapes in which he came of age. Despite it all, he was also on the cusp of superstardom and on his way to bringing light and joy to millions. He was 21.

Journey with James Taylor to a time before he became a Rock & Roll Hall of Fame and Songwriters Hall of Fame inductee, a recipient of the Kennedy Center Honors and both the Presidential Medal of Freedom and the National Medal of Arts—and a beloved voice to millions.

Thoughts
I’ve always liked James Taylor’s songs. They are very mellow and calming. I knew nothing about him other than his music so when I saw this Audible Original I knew I wanted to listen to it.

A few things I learned were… he came from a well to do family, he wasn’t as squeaky clean as I thought he was, he had 3 brothers and a sister and that many of  Taylor family members suffered from alcoholism and depression.

This was a short book at just over an hour and a half, but it was packed with information and I was glued to the story.

Taylor narrated the book himself and did a good job.

I think fans and non fans of James Taylor will enjoy this.