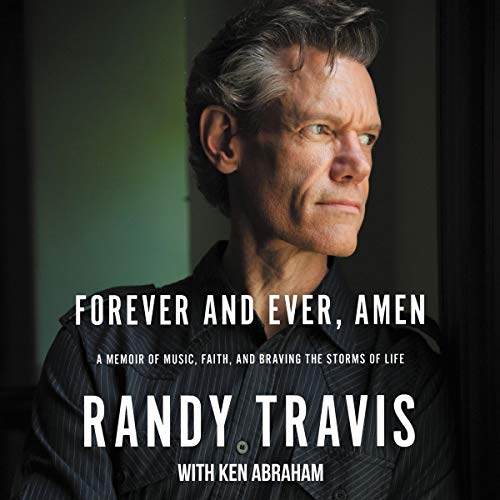 Forever and Ever, Amen:
A Memoir of Music, Faith, and Braving the Storms of Life by Randy Travis
Ken Abraham – contributor

The long-awaited, deeply personal story of one of American music’s greatest icons, a remarkable tale of the utmost heights of fame and success, the deepest lows of life’s sorrows, and a miraculous return from the brink of death – told as only Randy Travis can.

Beloved around the world, Randy Travis has sold more than 25 million albums in both country and gospel genres and is considered one of the finest performers of his generation, admired by superstars across the musical landscape, from Garth Brooks to Mick Jagger.

From a working-class background in North Carolina to a job as a cook and club singer in Nashville to his “overnight success” with his smash 1986 album Storms of Life – which launched the neotraditional movement in country music – Randy’s first three decades are a true rags-to-riches story.

But in 2009, this seemingly charmed life began a downward spiral. His marriage dissolved, he discovered that his finances had unraveled, and his struggles with anger led to alcohol abuse, public embarrassment, and even police arrest in 2012.

Then, just as he was putting his life back together, Randy suffered a devastating viral cardiomyopathy that led to a massive stroke he was not expected to survive. Yet he not only survived but also learned to walk again and in 2016 accepted his induction into the Country Music Hall of Fame by singing the hymn that explains his life today: “Amazing Grace.”

Filled with never-before-told stories, Forever and Ever, Amen is a riveting tale of unfathomable success, great joy, deep pain, and redemption that can come only from above.

Dive into Randy’s story with photos available in the audiobook companion PDF download.

PLEASE NOTE: When you purchase this title, the accompanying PDF will be available in your Audible Library along with the audio.

Thoughts
I enjoyed this audiobook so much. I learned about Randy’s childhood, his teen years, how he got started in the music industry, and more. It was all very interesting.

I  really only listened to classic rock up until the time I met my husband in the late 80’s. He liked all genres of music so I got used to listening to a lot of different music. Soon I was a fan of many different country stars, including Randy Travis.

There were parts of this book that were funny, but also a lot of sad things.  I learned so much about his life, and I’m sure there are many people who would learn a lot about him too.

I liked hearing about his career and the people he met, many famous names! I was sad to learn that his first manager/wife (Lib) controlled almost everything in his life, including who he spent his spare time with and his finances, and that she took so much from him. I liked her in the beginning of the book but then her true colors came out. I don’t think she was/is a person any of us would want to have in our lives. Read/listen to the book and I think you’ll agree.

Randy’s life was filled with super highs and super lows, and it breaks my heart to learn that Lib took such advantage of him. It was implied in the book that she was the one who took almost every penny he ever made, and I couldn’t think of anyone else who would have done it since the book stated she was the one person in control of everything. She also took most all of his belongings without his knowledge when she left because of their divorce. Thankfully, he found happiness with his second wife Mary.

He was always a trusting, kind person, and he has been taken advantage of, and that is so sad to me. Randy is a Christian, who has done un-Christian like things, which is true of a lot of Christians. But I’m glad that both his faith and wife Mary got him through the massive stroke and coma that almost took his life.

This was read by Rory Feek and he did a great job!

12 Responses to “Audiobook Review:
Forever and Ever, Amen: A Memoir of Music, Faith, and Braving the Storms of Life by Randy Travis”