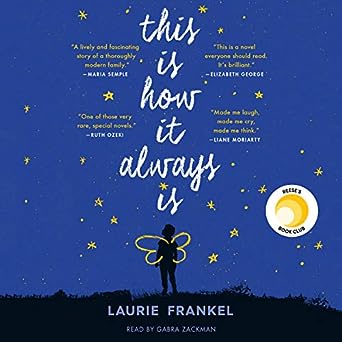 This Is How It Always Is by Laurie Frankel

Once Upon A Time, Claude Was Born
But first, Roo was born. Roosevelt Walsh-Adams. They Had decided to hyphenate because-and in spite-of all the unusual reasons but mostly so their firstborn could have his grandfather’s name without sounding too presidential, which seemed to his parents like a lot of pressure for a six pound, two ounce, brand new tiny human. First Roo was born, all pink and sticky and loud and miraculous. Then Ben was born. Then they debated and deliberated and decided just one more and therefore got twins- Rigel and Orion- who were no doubt going to voice hostility about their names when they became older than four,especially when Rigel found out he was named after the constellation’s toe, but who for the moment were too little and too loud to car. The leap from two to four felt astronomical, so their parents had turned to the heavens.

15 Responses to “First Chapter First Paragraph Tuesday Intros:
This Is How It Always Is by Laurie Frankel”