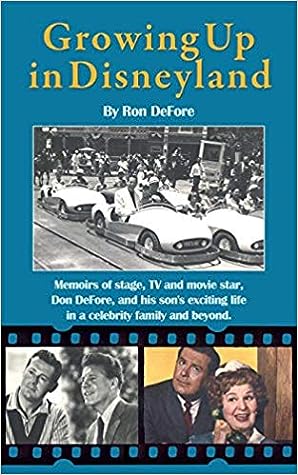 Growing Up in Disneyland by Ron DeFore

This is not a book all about Disneyland and Hollywood. Although Disneyland was my “backyard” for five years of my childhood, “Growing up in Disneyland”— with all its different “lands”—is more of a metaphor for my entire life beginning with growing up in a “Hollywood” celebrity family and into adult life filled with countless jaw-dropping experiences and career changes. Yes, there’s been many Hollywood-type books written, so for years I thought writing such a book would be redundant or just overlooked. I mean, who cares? Who would be interested?

My father, Don DeFore, was a well-known celebrity in the 1940s, ‘50s and ‘60s, a beloved actor of his time, and one of America’s first TV characters. Even later in life when his movies and TV shows were in re-runs, he still attracted many well-wishers at restaurants and other public places. Why? Not just because of his celebrity but because fans sensed that Don DeFore was never just acting, but projecting his genuine, “regular guy” personality that made him both endearing and enduring and loved by millions of fans.

As for interest in my life, other celebrity sons and daughters surely had exciting experiences. But did they have equally incredible brushes with history and amazing encounters similar to that of Forrest Gump? I’ll let you be the judge! After years of telling my life’s many stories in conversations and public presentations, the number of people telling me to write a book reached critical mass. I’ve now come to believe at least some people are interested. At minimum, this book will chronicle the achievements of one of America’s favorite character actors. But I must emphasize this is not meant to be a comprehensive biography of my Dad.

There are historians that know far more about every character he played and interesting details about each production. Many of his accomplishments happened before I was born. It is this period—his early live theater, film, and TV career where I use my Dad’s own words. For the first time, portions of his unpublished autobiographical memoirs, Hollywood—De- Fore ‘n’ After, are published here. Only minor editing was applied for clarity. His writings are in italics.

Although the first part of my book covers most of my Dad’s career highlights, this is mainly my story of growing up in a celebrity family, and many of the amazing experiences afforded me because of it and my upbringing. Being in the public relations business the later part of my life, I’ve learned to “give the headlines first” so here are just a few of them I will expound upon:

¶My Dad, Don DeFore, has a star on Hollywood Boulevard’s Walk of Fame.
¶ In the 1950s he was “Mr. Thornberry,” or “Thorny,” the next-door-neighbor character, in the tremendously popular weekly TV series “The Adventures of Ozzie and Harriet.”
¶Dad was president of the Academy of Television Arts and Sciences for two consecutive terms. In his first in 1954, he sold the first nationally televised broadcast of the Emmy Awards to NBC.
¶ In the early 1960s he co-starred in his own hit TV series, “Hazel,” playing the head of the household, Mr. Baxter, or “Mr. B.”
¶Dad was in more than thirty feature films, co-starring in about a dozen with Ronald Reagan, John Wayne, Rock Hudson, Spencer Tracy, Betty Hutton, Bob Hope, Lucille Ball, and Groucho Marx (a full list is on my website dedicated to his works: www.defore.net.
¶He co-starred in Charlton Heston’s first feature film, “Dark City.”
¶ In “My Friend Irma” Dad got co-star billing above “introducing Dean Martin and Jerry Lewis.” Similarly, with Doris Day’s first feature film, “Romance on the High Seas,” as well Lizabeth Scott’s first film, “You Came Along.”
¶Dad was the only person to own his own concession in Disneyland that displayed one’s name: Don DeFore’s Silver Banjo Barbecue restaurant in Frontierland.
¶Our family got to meet the Beatles during their 1964 U.S. tour. My sister, Dawn, kissed them all. My new 8mm captured the only known film of that private party in Brentwood.
¶As a real estate agent in Encino California, I showed a house to Michael Jackson.
¶ I got to meet Led Zeppelin and was the only onstage photographer (other than their own) at their September 4, 1970 Los Angeles Forum concert. ¶Mike Love, lead singer of the Beach Boys, asked me to be his PR guy for the 1986 “Live Aid Concert” in Philadelphia.
¶ I did a show with Robin Williams at which he and I arrived before anyone else and spent at least 30 minutes talking. But I don’t recall saying a word!
¶ The Robin Williams experience was during my mid-life crisis (at age 26) when I was a Disco DJ – “The Flying DJ” of L.A.’s famous Dillion’s Discotheque. I actually flew above the crowd in a space suit. I’ve got video to prove it, however, I never listed that exact job description as I later became…
¶A political appointee in President Ronald Reagan’s Administration—holding three positions (wow, good thing they didn’t see the video!).
¶Dad produced one of Ronald Reagan’s early political events in 1961 at the Santa Monica Civic Auditorium.
¶As a featured singer with orchestras in the1930s and early ’40s my Mom, Marion Holmes, made “I’m a Little Teapot” famous. She also had a pretty well-known matron of honor at her wedding: Judy Garland (for younger readers, “Dorothy” in the “Wizard of Oz”).

Thoughts
Wow, this book is GOOD! I’m so glad a joined this tour!!!

I’m a big fan of Disney, biographies, and autobiographies, so I knew right away I wanted to read this book. At first I didn’t remember who Don DeFore was, but after reading who he played on The Adventures of Ozzie and Harriet & Hazel, I did remember him, just not his name.

The book is full of information about the lives of Don and his son Ron, but also their careers and people they met along the way. There is a bit of politics, UFO’s/aliens, celebrities, and a lot more.

There is a “Photo Chapter” full of photos with their explanation, which I really loved.

This is a book that you don’t want to put down even though you know there are things you need to be doing. It will stay on my shelf that is reserved for books that made a big impact on me and that I plan to re-read.

Whether or not you’re a fan of Don Defore, you will enjoy this book.
I highly recommend this book to everyone!

GIVEAWAY:
This giveaway is for 3 winners choice of one print or ebook copy of the book. Print is open to the U.S. only and ebook is available worldwide. This giveaway ends November 29, 2019, midnight pacific time. Entries are accepted via Rafflecopter only.

15 Responses to “Book Review: & Giveaway
Growing up in Disneyland by Ron DeFore”