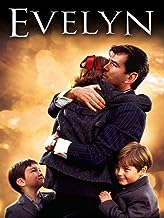 1953. Based on the true story of Desmond Doyle (Pierce Brosnan), who after losing his job and watching his wife leave the country with another man, has his children taken away by an arcane custody law. Doyle cleans up his act and wages an unlikely legal battle to regain custody.

Thoughts
I was searching for a movie to watch the other day and saw this movie which is available on Amazon Prime (until Aug. 31st). Since I love true story movies, the actors in the movie, and anything to do with Ireland, I knew I wanted to watch it.

Poor Desmond Doyle is out of work. As if that isn’t bad enough, his wife leaves him and his 3 children on the day after Christmas and he has no idea where she is.

Due to unfortunate events, his kids are taken away from him and he is told he can’t get them back. Since that was not something he was willing to accept, he sets out to do whatever it takes to get them back, which at that time (1953) was not something the law would allow. But Desmond loved his children more than anything and would not give up. His journey to do so made history.

I loved everything about this movie. I loved that this man was willing to do everything in his power to get his kids back.  I loved the relationships between him and his kids, him and his father, and the kids and their grandfather.  The actors were convincing in their parts, even the talented children.

Even though this movie is about such a serious subject, there’s still a bit of humor and some great songs (two were sung by Pierce Bronsnan), and overall just a feel good movie!

I LOVED it! It is now on my list of all time favorite movies.