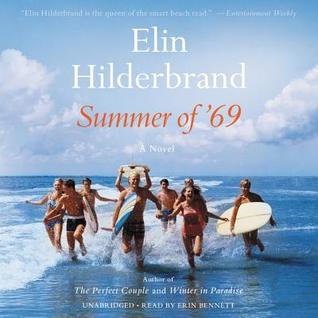 Summer of ’69 by Elin Hilderbrand
Narrated by Erin Bennett

Welcome to the most tumultuous summer of the twentieth century. It’s 1969, and for the Levin family, the times they are a-changing. Every year the children have looked forward to spending the summer at their grandmother’s historic home in downtown Nantucket. But like so much else in America, nothing is the same: Blair, the oldest sister, is marooned in Boston, pregnant with twins and unable to travel. Middle sister Kirby, caught up in the thrilling vortex of civil rights protests and determined to be independent, takes a summer job on Martha’s Vineyard. Only-son Tiger is an infantry soldier, recently deployed to Vietnam. Thirteen-year-old Jessie suddenly feels like an only child, marooned in the house with her out-of-touch grandmother and her worried mother, each of them hiding a troubling secret. As the summer heats up, Ted Kennedy sinks a car in Chappaquiddick, man flies to the moon, and Jessie and her family experience their own dramatic upheavals along with the rest of the country.

In her first historical novel, rich with the details of an era that shaped both a nation and an island thirty miles out to sea, Elin Hilderbrand once again earns her title as queen of the summer novel.

Thoughts
I loved everything about this book. It takes place in Nantucket and a lot of it is centered at the beach. I loved most of the characters but there were two that I wanted to shake from time to time.

The book is about a family who gets along really well. Even though they all love Grandmother Exalta, she is known for putting a damper on things.

I loved how they genuinely cared for each other and the book brought back a lot of emotions from my own childhood.  Jessie and Tiger reminded me of me and my twin brother. We were 11 yrs. old in ’69 and we got along really good from the time we were infants. Another thing that was similar was that Rick went into the Marines not long after high school. We had 3 older sisters and this book took me back in time to many good memories of growing up with my sisters and brother.

The book has a lot of references to 1969 like Woodstock, the moon landing, the Vietnam war, and the incident at Chappaquiddick in which Ted Kennedy’s car went over the the side of the  bridge  and 28 yr. old Mary Jo Kopechne died. I remember all of those things.

This book made me feel all kinds of emotions. I was engrossed in it from the beginning to the end and was sorry when it was over. I wanted more.

Hilerbrand did a great job with this book, especially since it was her first historical fiction. I listened to the audio cd version of the book and really enjoyed the narration.  Erin Bennett has a voice that is very easy to listen to.

I highly recommed this book!

16 Responses to “Audiobook Review:
Summer of ’69 by Elin Hilderbrand”