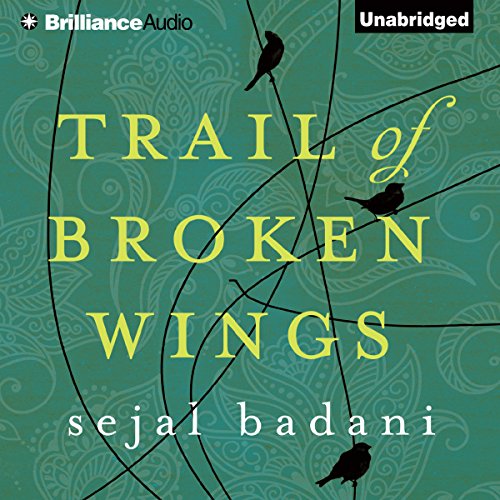 When her father falls into a coma, Indian American photographer Sonya reluctantly returns to the family she’d fled years before. Since she left home, Sonya has lived on the run, free of any ties, while her soft-spoken sister, Trisha, has created a perfect suburban life, and her ambitious sister, Marin, has built her own successful career. But as these women come together, their various methods of coping with a terrifying history can no longer hold their memories at bay.

Buried secrets rise to the surface as their father – the victim of humiliating racism and perpetrator of horrible violence – remains unconscious. As his condition worsens, the daughters and their mother wrestle with private hopes for his survival or death, as well as their own demons and buried secrets.

Told with forceful honesty, Trail of Broken Wings reveals the burden of shame and secrets, the toxicity of cruelty and aggression, and the exquisite, liberating power of speaking and owning truth.

Thoughts
I absolutely loved the book The Storyteller’s Secret  by this author so I decided to listen to this one too, which is her first book.

This is a semi hard review for me to write because I liked the story but the reactions of the charachers in almost every situation aggravated me. They avoided telling each other their true thoughts and acted like everything was fine when it most definitely wasn’t, they did things behind each other’s backs and kept secrets that would have probably made things better between them.

I don’t want to go into much detail of the story and give spoilers, but this family was messed up and a lot happens in the book.

Like I said, the story was good and kept me anxious to know how it would all turn out but I wanted to shake the sisters and their mother most of the way through the book.

Even though I struggled with the attitudes of the characters, I enjoyed the story and am glad I read it. I would read more from this author.