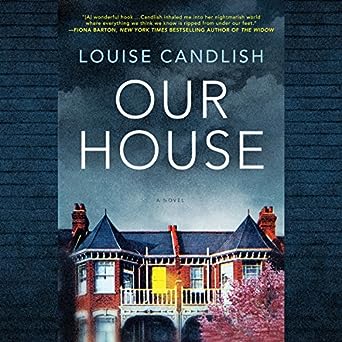 There’s nothing unusual about a new family moving in at 91 Trinity Avenue. Except it’s her house. And she didn’t sell it.

When Fiona Lawson comes home to find strangers moving into her house, she’s sure there’s been a mistake. She and her estranged husband, Bram, have a modern coparenting arrangement: bird’s nest custody, where each parent spends a few nights a week with their two sons at the prized family home to maintain stability for their children. But the system built to protect their family ends up putting them in terrible jeopardy. In a domino effect of crimes and misdemeanors, the nest comes tumbling down.

Now Bram has disappeared, and so have Fiona’s children. As events spiral well beyond her control, Fiona will discover just how many lies her husband was weaving and how little they truly knew each other. But Bram’s not the only one with things to hide, and some secrets are best kept to oneself, safe as houses.

Thoughts
This is another 4⋆ for me. I can’t fathom what Fiona was going through. First there was the confusion of someone else moving into her house. Then there was the realization that her husband had all their belongings removed from the house and that HE actually sold it to the new owners. The book was one surprise after another with a lot of twists and shocking moments.

I had just resigned myself to everything that had happened and was thinking everything would be ok with Fiona, and then Bram’s last entry took me by surprise and shocked me so much my jaw dropped, and I knew it was not over for her. I’m really hoping there is a follow up book.

10 Responses to “Audiobook Review:
Our House by Louise Candlish”