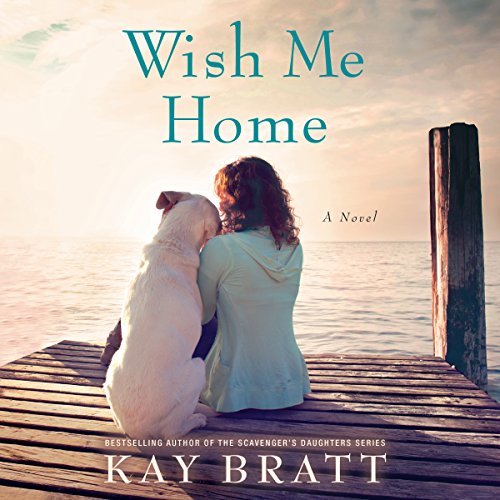 Wish Me Home by Kay Bratt
Narrated by Kate Rudd

A hungry, stray dog is the last thing Cara Butter needs. Stranded in Georgia with only her backpack and a few dwindling dollars, she already has too much baggage. Like her twin sister, Hana, who has broken Cara’s heart one too many times. After a lifetime of family troubles, and bouncing from one foster home to another, Cara decides to leave it all behind and strike out alone—on foot.

Cara sets off to Florida to see the home of her literary hero, Ernest Hemingway, accompanied only by Hemi, the stray dog who proves to be the perfect travel companion. But the harrowing trip takes unexpected turns as strangers become friends who make her question everything, and Cara finds that as the journey unfolds, so does her life—in ways she could never imagine.

Thoughts
Cara and her twin Hana have had a rough life. After something terrible happens, she leaves Georgia for Key West with little money and just a backpack. Not far from home her car breaks down so she takes off on foot. She runs into a stray dog whose paws are hurt and decides to keep him with her to tend to his injuries and then find him a forever home. In the meantime, she decides she has to name him so she doesn’t have to call him “dog”. She decides on Hemi because she loves Hemingway.  She meets a few people who cause her some trouble, but also a few who take her in for a bit and show her that not everyone in the world is bad.

She finally makes it to Key West and that is where her life starts to change for the better.

This book was so good right from the start. The characters were interesting, the different situations Cara found herself in sounded real and the ending was great, but left a few things open. I’m hoping that means there is a book #2 on the way.

The narrator did a great job and made the book very easy to listen to. This is another book that will make it on my top 10 favorites this year.

12 Responses to “Audiobook Review:
Wish Me Home by Kay Bratt”