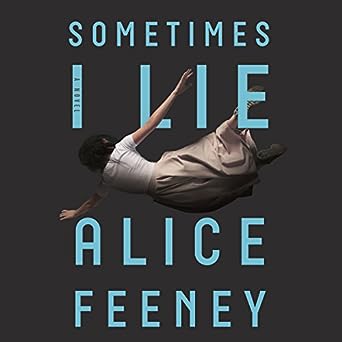 Sometimes I Lie by Alice Feeney
Narrated by Stephanie Racine

My name is Amber Reynolds. There are three things you should know about me:

I’m in a coma.
My husband doesn’t love me anymore.
Sometimes I lie.

Amber wakes up in a hospital. She can’t move. She can’t speak. She can’t open her eyes. She can hear everyone around her, but they have no idea. Amber doesn’t remember what happened, but she has a suspicion her husband had something to do with it. Alternating between her paralyzed present, the week before her accident, and a series of childhood diaries from 20 years ago, this brilliant psychological thriller audiobook asks: Is something really a lie if you believe it’s the truth?

This book is told in 3 different time settings.
Now– when Amber wakes up in the hospital, not knowing how she ended up there. She can hear everything that’s being said & feel everything. She can feel on the inside and outside. She can feel when people touch her or when they administer a bag of medicine etc.
Then– the events leading up to her being admitted to the hospital.
Diary entries– from 1992 when she was a child.

I can’t imagine being in a coma. Hearing everything that’s being said but not being about to speak. She would scream at them, trying to make them hear her but they couldn’t. She was trapped inside her body, having no say in any conversation about her or what was being done to her.

I’ve only recently started reading mystery/thrillers again and the last few I’ve read (listened to) have been amazing. This is my favorite. Just when you think you have everything figured out, there’s another twist that shocks you again. There’s one twist/surprise after another and it kept me so engrossed that I would stay awake at night even when I had to work the next day. I literally couldn’t wait to see what happened next.

Each twist was shocking. So much so that I had to put the book on pause so that I could think about what just happened. But there was one majorly huge twist where I had to stop for about 10 minutes and try to wrap my head around what I’d just heard. Even after I thought I got it all figured out, I was still in shock and kept thinking about it, trying to make sure I got it right.  It was  a big shock!

I’ve read some reviews of this book where people say it was too confusing and the ending didn’t make sense. I agree. But if you take the time like I did and try to decipher what happened, it makes so much sense. This is the most cleverly written book I’ve ever read.

This is the authors first book, which surprised me. You’d think she’s been writing for many years. If review sites had a 10 star rating, that’s what I’d give this book!

The book is narrated by Stephanie Racine who did a terrific job!

The author’s website says the book is soon to be a tv series. I sure hope it’s available in the U.S. !

I will definitely be getting a copies of her future books.

12 Responses to “Audiobook Review:
Sometimes I Lie by Alice Feeney”