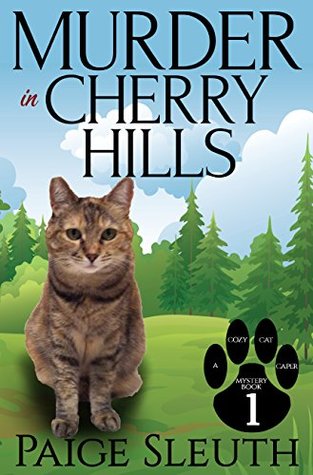 Kat Harper has only just returned to her small hometown of Cherry Hills, Washington when she discovers the dead body of her neighbor, Mrs. Tinsdale. Matilda, Mrs. Tinsdale’s orphaned rescue cat, just might be the only eyewitness to the murder. But how do you convince a cat to reveal “whodunit”?

Thoughts
This is the first book in a 21 book series, which would usually make me want to imediately pass on it, but all the books are short so I decided to read it and I’m glad I did. I really liked it.

Kat opens her apartment door and see’s her neighbor’s (Mrs. Tinsdale) cat siting there. Since she knows Mrs. Tinsdale doesn’t like Matilda roaming around inside the apartment building, Kat decides to take her back to Mrs. Tindale’s apartment. When she gets to the door she see’s it’s open a bit. She goes inside and finds her neighbor laying on the floor dead, after calming herself down some, she calls the police. Her childhood friend Andrew is the cop who shows up.

Andrew doesn’t want Kat to get involved in searching for clues but she can’t stop herself. The murderer is caught with the help of the cat. It surprised me when I found out who dunnit.

I really enjoyed this quick read, the story was interesting and the characters believable. There was a bit of clean romance and the violence was tame.

What An Animal
Purrfect