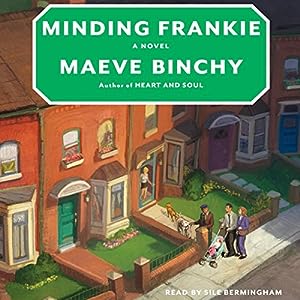 When Noel learns that his terminally ill former flame is pregnant with his child, he agrees to take guardianship of the baby girl once she’s born. But as a single father battling demons of his own, Noel can’t do it alone.

Fortunately, he has a competent, caring network of friends, family and neighbors: Lisa, his unlucky-in-love classmate, who moves in with him to help him care for little Frankie around the clock; his American cousin, Emily, always there with a pep talk; the newly retired Dr. Hat, with more time on his hands than he knows what to do with; Dr. Declan and Fiona and their baby son, Frankie’s first friend; and many eager babysitters, including old friends Signora and Aidan and Frankie’s doting grandparents, Josie and Charles.

But not everyone is pleased with the unconventional arrangement, especially a nosy social worker, Moira, who is convinced that Frankie would be better off in a foster home. Now it’s up to Noel to persuade her that everyone in town has something special to offer when it comes to minding Frankie.

Thoughts
So So So good! I loved it!

The story was good from the beginning, but got even better and better as it went along. Noel was told by a terminally ill girl that she was pregnant and that he was the father. She wanted him to raise the baby when she was born since she would not be there to do it herself. He had a drinking problem but turned his life around to be the best dad to Frankie that he could be. He slipped a few times but he had a great  support system who was always there when he needed them. So many people loved Noel and Frankie, and they gave a lot of their free time to making sure they were ok.

The characters were all different kinds of people, and each one brought their own style to the story, making it very interesting. I liked all of them and wish everyone could have people like this in their lives.

Moira was in a different category. She didn’t treat people very well, was very opinionated, and thought Frankie would be better off with someone other than Noel. She was always snooping and prying, trying to find someone or something that could make that happen. It was her fault Noel fell of the wagon. I didn’t like her much, although later in the book you find out why she thinks and acts the way she does. It made me dislike her less, but it still wasn’t a good enough reason for how she treated people, especially Noel.

The book had a few sad parts but mostly it was upbeat. I really enjoyed this on audio as the narrator did a great job. Binchy is fast becoming one of my favorite authors.