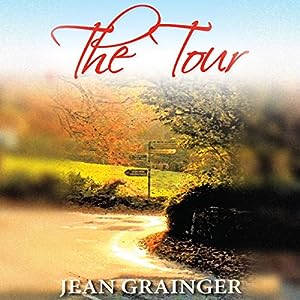 The Tour: A Trip Through Ireland by Jean Grainger
Narrated by Patrick Moy

A charming Irish bus driver. A group of disparate American tourists. One life changing week. Take a tour you’ll never forget as you navigate the stunning vistas of gorgeous Ireland along with the hearts and minds of a cast of characters who will live with you long after you’ve finished this audiobook.

During a routine tour of Ireland, tour guide Conor O’Shea finds himself on a journey of his own through the lives of his hilarious companions as together they navigate both the Irish countryside and the secrets of their individual lives.

A Wall Street banker, a divorcee, a musician, a cop, and a professor all enter Ireland with something on their minds, and throughout their journey with Conor as their guide, they each begin to show something of themselves against the spectacular backdrop of Ireland.

As colourful and turbulent as the wild Atlantic coast, The Tour offers more than just a look at one of the world’s most beautiful places, but contrasts Ireland’s open skyways and idyllic views against the secret lives of the individual. Witty, informative, and with a touch of romance, The Tour offers a unique look at the lives of others amidst the Emerald Isle.

One reviewer just said, ‘book a flight, if Ireland is anything like she describes, I need to be there’. Another claimed, ‘up all night to finish, I laughed, I cried, I didn’t want it to end’.

Can you afford to miss the trip of a lifetime?

Thoughts
I loved this audio! LOVED it! It took me on a trip that I would love to take in real life. The tour guide Conor O’Shea is a blessing to all on his tours. No matter what you need, he can make it happen.

This tour was a mixed group of people from America. There was someone who dressed strange and had strange hair, another who was timid. There was a rich person and a person who was poor, and a gold digger and a bully, to name a few.

All of them made for a great cast of characters. The story was told in a way so that I could keep track of who was who and I loved hearing what they were up to next.

The book was about 10 hours long but it didn’t seem that long because I was so wrapped up in the story. It went from one great story with great characters to another and they all came together at different times throughout the book and I loved it from the beginning to the end. This is book #1 in a 3 book series and I’ve already bought the other 2 audio’s.  The book is narrated by Patrick Moy who did an amazing job.

If you like books set in Ireland, pick up the The Conor O’Shea Series. It’s a great book!

24 Responses to “Audiobook Review:
The Tour: A Trip Through Ireland by Jean Grainger”