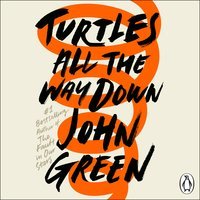 It all begins with a fugitive billionaire and the promise of a cash reward.

Turtles All the Way Down is about lifelong friendship, the intimacy of an unexpected reunion, Star Wars fan fiction, and tuatara. But at its heart is Aza Holmes, a young woman navigating daily existence within the ever-tightening spiral of her own thoughts.

Thoughts
Aza has mental health issues including OCD and anxiety and can’t stop thinking about getting C Diff. That’s a big part of this book.

Aja and her BFF Daisy are investigating the disappearance of Russell Pickett, the father of Davis, one of Aza’s friend from a few years before. There is a huge cash reward to anyone who calls the police with a clue that leads to him.

There is a lot that happens. Good things and bad things, and it all makes this a fascinating book. The whole story about the tuatara was great, even though some of it left me shaking my head.

The book is narrated by Kate Rudd who did such an amazing job with all the different characters, even the men. I really don’t know how she did it, but they all had their own unique voice.

The ending came sooner than I was expecting, but it left me satisfied. I would love a sequel to this book.

12 Responses to “Audiobook Review:
Turtles All the Way Down by John Green”