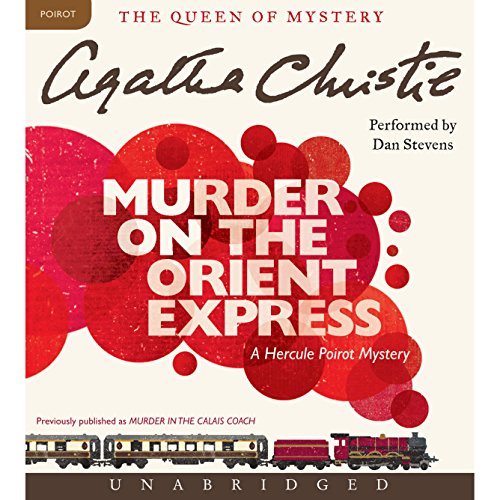 Murder On The Orient Express by Agatha Christie

“The murderer is with us – on the train now…”

Just after midnight, the famous Orient Express is stopped in its tracks by a snowdrift. By morning, the millionaire Samuel Edward Ratchett lies dead in his compartment, stabbed a dozen times, his door locked from the inside. One of his fellow passengers must be the murderer.

Isolated by the storm, detective Hercule Poirot must find the killer among a dozen of the dead man’s enemies, before the murderer decides to strike again….

Thoughts
This is a whodunnit at it’s best. Poirot is my favorite detective, and Christie always does a great job with his character. He always makes me think one person is guilty, then makes me change my mind usually more than once, and then says who the killer is and it shocks me every time.

There were more characters than I normally like in a book, but the descriptions of them are so vivid that I had no problem keeping them straight.

There were so many clues, so much happening, and so many ways the story could have gone, but in the end it was one of the best endings I’ve ever read in a book.

The book was narrated by Dan Stevens who did a great job with all the voices.

I really enjoyed this book and would recommend it to all lovers of  this genre of book.

13 Responses to “Audiobook Review:
Murder On The Orient Express by Agatha Christie”