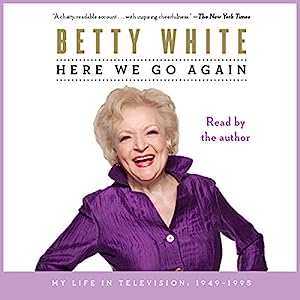 Here We Go Again: My Life In Television by Betty White

“Here is Betty White – a woman who has been on television forever!” is generally how Betty White is introduced. And quite accurately, too, since she first appeared in 1949, when both she and television were rank beginners.

Since then, she has had one of the most amazing careers in TV, winning five Emmy awards, creating such unforgettable characters as Sue Ann Nivens and Rose Nylund, and appearing in a host of television classics from 1952’s Life with Elizabeth to The Mary Tyler Moore Show and The Golden Girls.

Here We Go Again gives an overview of television’s golden era, packed full of wonderful anecdotes about the many famous personalities with whom Betty has worked. It also gives a fascinating behind-the-scenes look at television over five decades, from her first show, Hollywood on Television, which ran live five and a half hours a day, six days a week (33 hours per week!), to Betty’s current television work. In addition, she talks about her personal life – how her hectic career caused strain in her relationships and how she finally found happiness with her third husband, the late talk-show host Allen Ludden.

As warm and funny as its author, Here We Go Again will thrill her many fans and delight all of those who are interested in the history of America’s most popular form of entertainment.

Thoughts
Betty White is such an interesting person, how could this book be anything but interesting. I enjoyed learning things I didn’t know about her. She knows so many people in “the biz” and leads such an amazing life. I loved listening to her thoughts on making some of the decisions she made, her love for her family, friends, tv, Alan Ludden, and animals. I loved hearing her infectious laugh.

This was a short listen but it’s pack full of wonderful stories. I think we need an update on what’s happened in her life since this book.