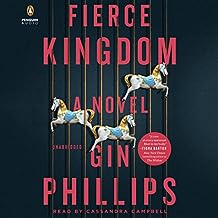 An electrifying novel about the primal and unyielding bond between a mother and her son, and the lengths she ll go to to protect him
The zoo is nearly empty as Joan and her four-year-old son soak up the last few moments of playtime. They are happy, and the day has been close to perfect. But what Joan sees as she hustles her son toward the exit gate minutes before closing time sends her sprinting back into the zoo, her child in her arms. And for the next three hours the entire scope of the novel she keeps on running.

Suddenly, mother and son are as trapped as the animals. Joan s intimate knowledge of this place that filled early motherhood with happy diversions the hidden pathways and under-renovation exhibits, the best spots on the carousel and overstocked snack machines is all that keeps them a step ahead of danger.

A masterful thrill ride and an exploration of motherhood itself from its tender moments of grace to its savage power Fierce Kingdom asks where the boundary is between our animal instinct to survive and our human duty to protect one another. For whom should a mother risk her life?”

Thoughts
I was really excited to start listening to this book since I’d read a lot of positive reviews.

While I enjoyed the book very much, there was a lot of time spent on the layout of the zoo. I did like that Joan had taken Lincoln to the zoo so often that she knew where she could keep them safe.

I liked all the characters. They all made the book exciting and I thought they were perfect choices for the book. The author was very descriptive, so even after a few weeks, I can still “see” some of the scary scenes in my mind. I can’t imagine being in that situation, especially with a young son.

The book was really good. I liked the relationship between  Joan and her son Lincoln. I liked how close they were and how well behaved Lincoln was. They listened to each other and the love they shared was obvious.

If I had to say something negative about the book it would be that I thought the ending was a bit too abrupt. I would have liked more closure.

The book was narrated by Cassandra Campbell and I enjoyed listening to her.