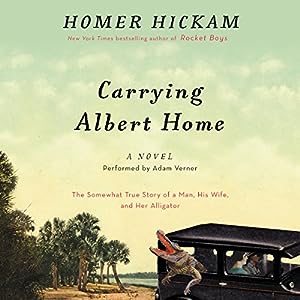 Big Fish meets The Notebook in this emotionally evocative story about a man, a woman, and an alligator that is a moving tribute to love, from the New York Times best-selling author of the award-winning memoir Rocket Boys – the basis of the movie October Sky.

Elsie Lavender and Homer Hickam (the father of the author) were high school classmates in the West Virginia coalfields, graduating just as the Great Depression began. When Homer asked for her hand, Elsie instead headed to Orlando, where she sparked with a dancing actor named Buddy Ebsen (yes, that Buddy Ebsen). But when Buddy headed for New York, Elsie’s dreams of a life with him were crushed, and eventually she found herself back in the coalfields, married to Homer.

Unfulfilled as a miner’s wife, Elsie was reminded of her carefree days with Buddy every day because of his unusual wedding gift: an alligator named Albert she raised in the only bathroom in the house. When Albert scared Homer by grabbing his pants, he gave Elsie an ultimatum: “Me or that alligator!” After giving it some thought, Elsie concluded there was only one thing to do: Carry Albert home.

Carrying Albert Home is the funny, sweet, and sometimes tragic tale of a young couple and a special alligator on a crazy 1,000-mile adventure. Told with the warmth and down-home charm that made Rocket Boys a beloved best seller, Homer Hickam’s rollicking tale is ultimately a testament to that strange and marvelous emotion we inadequately call love.

Thoughts
I loved this audiobook so much! It was a great story and I loved Homer, Elsie, and especially Albert.

The story is a bit of truth and fiction, all of it is very entertaining, and most of it is really funny. Who would think a simple trip from West Virginia to Florida would lead to all the encounters and opportunities they found themselves in. Each story was unique, and each one was rally good. I’ll be thinking about this story for a long time. I may have to listen to it again in the future, I really loved it.

Of the three of them, I loved Albert the most. He was a most unusual Alligator, but I’m assuming that since he was sent to Elsie very young that she helped mold him into the “little boy” he was. The rooster was also very amusing, I’d have loved to see him sitting on top of Albert like they were best buds.

The book is narrated by Adam Verner, who did a fantastic job!

I can’t say enough good things about this audio, it was fantastic!

Note:
There was one chapter that had a lot of the GD word in it. I definitely didn’t like that, but I don’t remember any other cussing in the book.