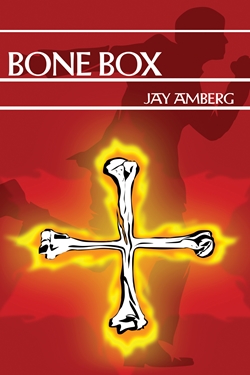 On a hill overlooking the Aegean Sea in Turkey, an international team of archeologists discovers a stone box that first-century Jews used to rebury their dead. The box’s Aramaic inscription: Jesus of Nazareth, the Christ. Sophia Altay, the beautiful French-Turkish archeologist who heads the team, tries to keep the discovery secret until she can authenticate the ossuary. She knows that people will kill to obtain the relics—and to suppress the box’s other contents, documents that could alter Western history.

Joseph Travers, an American sent to Turkey to evaluate the archeological dig, soon finds himself pulled into the web of betrayal, reprisal, and violence. In his journey through Istanbul’s mosques and palaces, the archeological sites around ancient Ephesus, and, ultimately, the strange and mystical terrain of Cappadocia, he comes to understand the epochal meaning of the bone box.

Uncovering the Ossuary (from Chapter 2)

The sky is cobalt, but the sun is already low—and little light reaches the trench in which the two men work. The evening air is hot and still as though it has hung there for centuries. Sweat soaks the stout man’s sleeveless T-shirt and mats the gray and white hair on his arms and shoulders. His nose is bulbous above his mustache, the top of his head bald except for long strands of hair hanging limply over his left ear. He grunts as he pushes dirt aside with his trowel. The taller, younger man is more careful, but he, too, breathes hard as he whisks dirt with his brush. The discovery, far more than the exertion, is taking his breath. He is clean-shaven; his features are fine, his black hair thick. Neither man speaks until they have completely uncovered the ancient ossuary, the bone box.

When the stout man stands, his head is still well below the trench line. He stabs the trowel into a pile of dirt, wipes his grimy hands on his pants, pulls up the front of his shirt, and smears the sweat from his face. He picks up an empty plastic water bottle, glares at it, and tosses it next to the trowel. The younger man sets his hands on his hips, catches his breath, and stares at the ossuary. The bone box, a meter long and seventy centimeters wide, seems to glow even in the trench’s shadows. Although he can’t read the words etched into the stone, he recognizes them as Aramaic. The symbols—the equal-armed cross within the circle within the six-pointed star—are familiar, but their juxtaposition is not.

As the call to prayer begins, a cirrus horsetail swirls through the rectangle of sky. The voice barely carries into the trench, but the two men turn and stand still. The heavy man murmurs prayers, and the thin one bows his head in silence, his prayer of a different sort. A prayer of both gratitude and supplication. A prayer that this ossuary is what he yearns for it to be. The cloud’s wispy tail snaps clear.

When the echo of prayer ceases, the stout man squats and digs his fingers under the corners of the bone box.

“Wait!” the young man says in Turkish. “She should be here. We must wait for her.”

Glowering across the box, the stout man grabs the hand-pick he used earlier.

“No!” The young man stoops and presses his palms on the ossuary’s lid. “She must open it.” His face reddens, and his fingers burn as though the ossuary is too sacred, too hallowed, too inviolable, to be touched by humans.

The stout man swings the pick across the young man’s knuckles.

The young man leaps back, his eyes wide. His mouth opens, but words don’t form. Blood beads on the index and middle fingers of his right hand.

The stout man leans over and jams the pick’s tip under the rim of the ossuary’s lid. As he pushes the handle with both hands, getting his weight into it, the lid creaks open. Keeping the pick in place as a wedge, he kneels and runs his stubby fingers under the lid. Stale air rises as he lifts the lid, holds it to his sweating chest, and stares into the box.

Despite himself, despite his stinging fingers and welling tears, the young man steps forward and peers into the box. Making the sign of the cross repeatedly, he takes a series of deep breaths in an unsuccessful attempt to calm himself. Blood trickles down his hand and drops, bright splotches darkening into sandy soil. Blinding sacrosanct light rises from the ossuary, weaving around them and spiraling from the trench. He glances at the stout man who is unable to see the light, runs his hand through his hair, and gazes back into the box. He cannot draw his eyes from the contents, though his pupils might at any second be seared and his skin peel away. The moment is every bit as frightening as it is exhilarating. His blood boils—the Janissary blood, the blood of his lost ancestors, the wanderers and cave dwellers alike. There is much more to this even than he imagined, much more to it than she will at first believe. 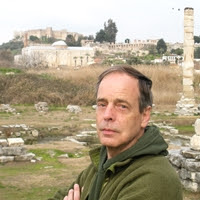 Jay Amberg is the author of eleven books. He received a BA from Georgetown University and a PhD from Northwestern University. He has taught high school and college students since 1972.

Among his books on teaching are School Smarts and The Study Skills Handbook, published by Good Year. Amberg wrote The Creative Writing Handbook (Good Year) with Mark Henry Larson and Verbal Review and Workbook for the SAT (Harcourt Brace Jovanovich) with Robert S Boone.

Award-Winning Finalist, Thriller, 2015 Readers’ Favorite Book Award Contest Award-Winning Finalist, Thriller, 2015 National Indie Excellence Awards Award-Winning Finalist, Thriller/Adventure, 2015 International Book Awards “A…well-written, fast-paced thriller that follows in the footsteps of The Da Vinci Code and Indiana Jones.” —Kirkus Reviews “This story takes you on an incredible and dusty journey from Istanbul to ancient Ephesus, Izmir, and Cappadocia, blended with Christianity, archaeology and Islam, described with accurate detail to bring the story alive.…Jay Amberg is a master of description and intrigue…the plot and characters are believable and interesting.…keeps you guessing through each and every chapter. A cross between The Da Vinci Code (Dan Brown) and The Sign of the Cross (Chris Kuzneski) this is an “un-put-downable” book of the highest quality.” —Julie Hodgson, Readers’ Favorite “A mystery of biblical proportions right down to the very last page. As the story unfolds, the characters’ histories, weaknesses, and ambitions are brought to light through their interactions with one another: the lies they tell, the crimes they are willing to commit, and the truths they are willing to confide only to the right person at the right time. And yet, as Joseph and Abrahim put themselves in harm’s way to protect what has become so precious to them, we wonder: What truths are some people willing to die for?” —Ruth Duran-Chea, San Francisco Book Review “A reflective thriller that will leave you catching your breath while illuminating your own sense of connection with our shared past.” —Michele Fitzpatrick, Author, The Women’s Center “The lingering questions of what’s real and what isn’t keeps the reader invested in the story. It’s not just the mystery about what’s inside the ossuary and if the artifacts are authentic.…Politics, religion, sexuality, culture, deceit, greed, and prejudices turn this thriller into a page-turner. There’s a need to find out what will happen with the bones and letters, but there’s also a desire to know what will happen to the characters.…The stories within the story demand attention and remind us that one event can be perceived rightly or wrongly from several perspectives.” —T.B. Markinson, Self-Publishing Review “Will mystify, entrance, enthrall and captivate readers.” —Fran Lewis, Just Reviews

“Jay Amberg takes his place among the elite of this country’s suspense-adventure authors.” —Clive Cussler, for Deep Gold “A taut thriller that will…elate readers. Brilliant.” —Midwest Book Review, for Blackbird Singing “The final recovery scenes in the face of a raging hurricane deliver true high seas drama.” —Publishers Weekly, for Doubloon “An inspiring call to action…” —Kirkus Reviews, for Cycle

6 Responses to “The Bone Box by Jay Amberg”