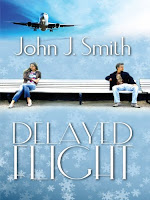 Veronica, a widow from an abusive marriage, is looking forward to having a wonderful visit with her daughter, Jeri. It had been a year since Jeri moved away to college andVeronica cannot think of anywhere else she would rather be than spend a peaceful Christmas with Jeri.
Jared thought his day had already gone badly when his hiring proposal for consultants was put on hold. Now he finds himself stranded in a blizzard and discovers his rental car has a flat.To add insult upon injury, the keys are locked in the trunk!
When Veronica sees Jared walk into the airport terminal and takes a seat across from her, she can feel her emotions run amok bouncing somewhere between loathing and love. He was the man, whom she had loved and yet he had walked out on her. Jared on the other hand wants to do everything in his power to heal her wounds. In the deepest region of his heart, he wants to start over.
On icy roads, and deep in thought, Jeri’s is suddenly involved in a serious accident, and as Veronica rushes through the halls of the hospital, in search to find answers, she stumbles upon Jared. It is then Veronica realizes at that their present has brought them together shrouded in the events of their past while the doctors feverishly work to save her daughter’s life.

I usually don’t do well with love stories. Most of them either take forever to get the two together, or there is too much brown chicken brown cow going on.

This though, was exactly the type of love story I like. Right from the beginning I felt for these two. Or should I say three.

Some people have said it was a little too much. But I say if it’s true love, it will always be true love, no matter who or what causes a separation.

Not only was it a great love story, it was also funny, and had a little suspense going on.

This was a fun read and I recommend it to anyone who loves love.

John writes under two names John J. Smith and pen name Jonathan Black. Why does he do this?  He has been told when a reader sees his work they have an expectation, hence the two names. He has won several awards under each name. He has been called a prolific Fiction writer. He enjoys writing romance and mainstream as John and paranormal and paranormal romance as Jonathan. Several of his novels have been converted or rewritten into screenplays; for which he has also have won several awards.
John J. Smith resides in Plano, a suburb of Dallas, Texas.